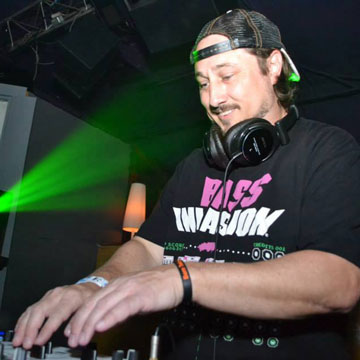 Brad Smith is one of the pioneers of Electronic Dance Music in Florida and it's sub-genre: Florida Breaks. His name is synonymous with Anthems, whether he is crafting them in the studio or catapulting a crowd into a frenzy. Brad stormed into the DJ arena 1992 and has never slowed down! Brad has also kept the same furious pace in the studio with over 500 tracks and remixes released. From his early years as Mr. Smith (Breaks) and Praying Mantis (DnB and co-founder of Stateside collective) to his more recent works as Spit 'n' Blood (Dubstep) and Sleven (Tech House). Brad has had 33 Beatport Top 100 hits in Progressive House, Electro House, House, DnB, Dubstep, Breakbeat, Glitch Hop and Psy-Trance. Brad has remixed such notables as pop sensation Right Said Fred of "i'm Too Sexy" fame and Salme Dahlstrom - "C'mon Yall" which can be heard on Suave TV commercials. Brad Also owns and runs the underground label, Crescent Records.

Brad Smith started writing and recording music in 92, being taught by the legendary Rob Intile (Lovecraft's writer, producer, engineer and singer). Brad released his first record in 1996 on his own imprint, Crescent Records. Since then, he has released over 250 tracks, 30 CDs and over 60 remixes on numerous labels: Toolbox(UK), DarkWax (UK), Moonshine, Panadisc, Stickman, Xquisit, Painted Puppy, Streetbeat, Version 3.0 and Breakzlogik Records [to name only a few]. Brad's journey in the studio has lead him in many directions of exploration making House, Tech House, Techno, Progressive House, Minimal, Electro House, Drum n Bass, Trance, UK Hardhouse, Deep House and Breakbeat.

Brad Smith has held residencies at 100's of clubs across the southeast US including The Parthenon, The Abyss, The Edge, 911, Infinity, The Masquarade, Ultraviolet, The Rubb and Luna Lounge (to name only a few).

In 1995, Brad started to expand his musical realms while djing at the infamous Parthenon club in Tampa, Florida; along with fellow dj and mentor Dj John Panapolous. John broaded Brad's mind by educating him in the best of House and Progressive House as well as teaching him about the vinyl market and business of the major record labels and record pools.

In 1997, Brad won his club, Luna Lounge, best dance club of the year. Brad was the only DJ at the venue, playing his legendary 5 hour sets of house, trance and breaks every Saturday for 3 years to a standing room only packed house!

In 1998, under the moniker, DJ Praying Mantis; Brad alongside with Dj Dread and Bamboo started the infamous Stateside collective crew. The outfit was a group of inspiring Drum N Bass artists whom helped pioneer the genre in Florida. In 2000, Brad started his mash-up/remix label, Mr. Smith's DJ Tools, with partner DJ Spice (of Friction and Spice fame). These white-label remixes were a huge success and found their way into record bags across the Globe.

In 2000, Brad created the moniker Mr Smith and his bootleg remixes under this name found world wide success for which he is still known to this day. Most memorable is his remix of Sabotage's "Return To Ibiza" which not only got air play from most of the world's top 100 DJ but also most the world's top 100 Radio stations. The track is still getting played across the globe on the radio 10 years after it's release.

In 2008, Brad adpoted the moniker, Sleven; and has used it to produce underground Tech House, Minimal and Techno. Inspiring many of Florida Tech House DJs of today.

In 2013, Brad's remix of "Vila Roel - Survive This World" debuted at #18 on the Beatport Progressive House Top 100 releases and #23 on the Beatport Electro House Top 100 releases. Also, Brad has charted twice this year on the Beatport Glitch Hop Top 100 Tracks Chartat #61 with LOWFREQ - 50k Watt  (DJ Brad Smith Remix) and #85 with Dynomyt - Squares N Things (DJ Brad Smith remix)! The rest of the year will see over 10 new Progressive House and Electro House remixes on 9 different labels, making 2013 one of Brad's most productive years to date!! 2014 was stronger yet and 2015 will be huge.